Today was the design expo! It went really well. Here are my thoughts on this semester, the expo, and the future of GridBeat.

It’s here! I’ve just submitted the update that has the last 5 levels added in, so that should roll out soon. 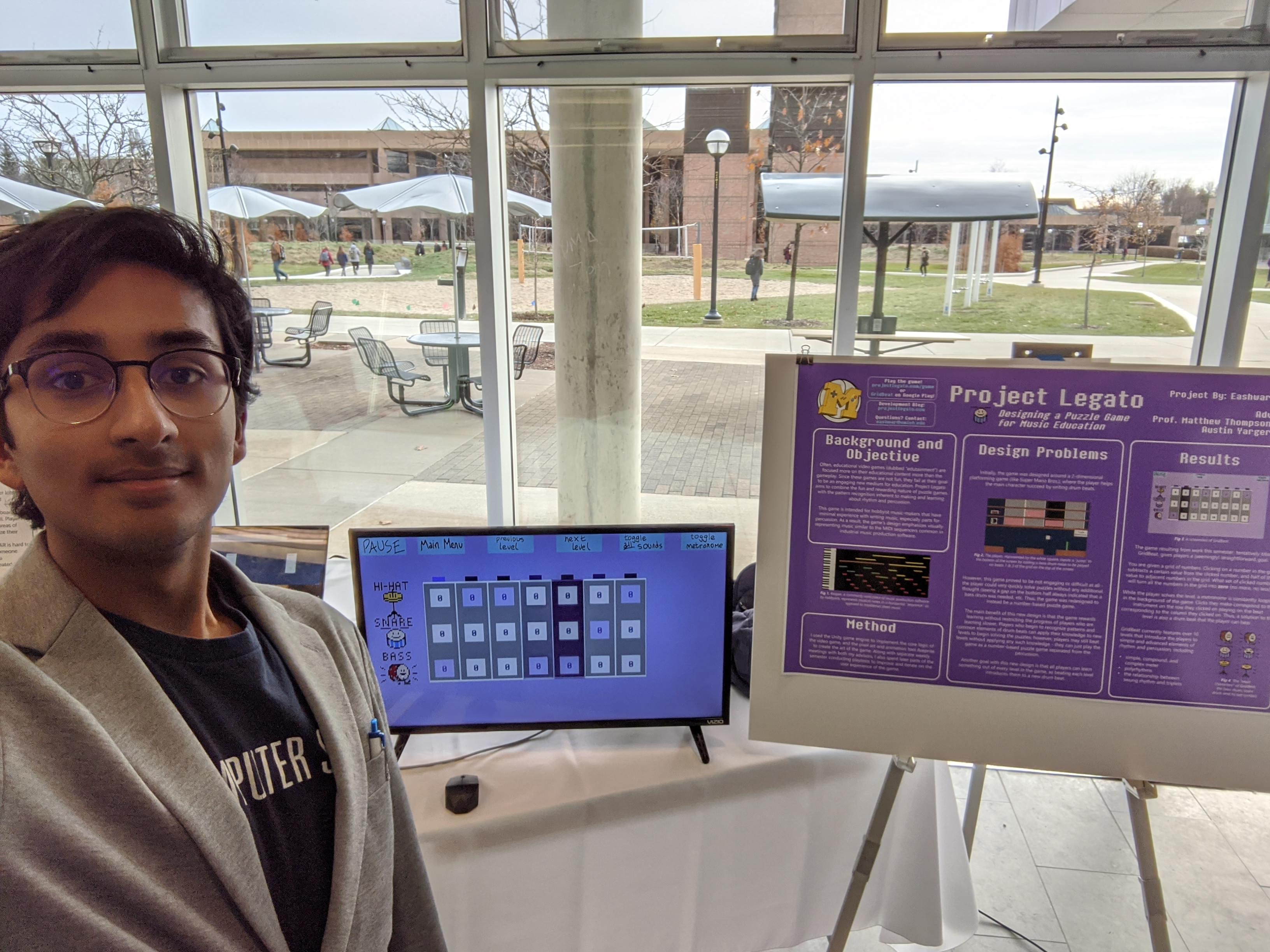 The expo was really neat. I was happy that people took the time to talk with me about music education, educational games, puzzle games, or anything at all. A few people stopped and played through the game from start to finish - one person even determined a greedy algorithm to solve every level in the game without any musical thinking needed, which was very cool to see.

I struggled to convey the fact that the work I did this semester was all solo and I didn’t really have any team members. I also found that not everyone immediately understood the merit in making a game branded as “musical” in nature that didn’t really require any musical skill to be able to play.

The first two hours of the expo went away in a flash. Before I knew it, it was already 2pm and I’d been presenting my game to people pretty consistently. Then, starting around 2:30pm, the crowd kinda died down and I felt that I was kinda waiting idly for a bit and not really getting a lot of engagement. It wasn’t just me not getting engagement, though; pretty much everyone around me wasn’t getting that.

I think one of the coolest conversations I had was a freshman percussion performance major who noted how she usually thinks of her percussive accompaniment based on the music that she’s accompanying. Doing this would introduce considerable work into each level, as I’ll have to write accompaniment for each level that helps teach the same musical intuition I teach just using the metronome and drums, but it might be interesting to explore.

I was surprised to see that the people who played the game did not really “brute force” their way through the levels - everyone who engaged with it played thoughtfully and were listening, trying to learn about the drum beat, and really enjoying the game. It made me happy that the game appears to be successful.

This semester was overall, very successful. I think the biggest things I learned were (in no particular order):

I took this independent study alongside the game development capstone, EECS 494, another upper level CS class, a technical communications class, and a professionalism class. This was very tough on me mentally, as I was more-or-less working concurrently on two games the entire semester.

I learned a lot about how much I can really create in a short span of time, and how to prevent creative burnout when I’m essentially crunching for a semester-long span. It means deliberately making time to play games, spend time with my friends, and have time to not think at all.

I had to pivot, because I was making first and foremost a video game. I had some reluctance to admit that what I started off with was not fun or compelling, because I was committing the sunk cost fallacy.

I had to understand that even though I’d been working hard, if I continued I’d be just like the other educational games that I was saying are bad for being content focused and unfun. That was the reason I truly became okay with pivoting. My goal really is to make something engaging. I want people to play my game all the way through.

The pivot was successful partially by chance, and partially because of how I engineered the metronome/beat system. By chance, I spotted that Polygon video about Picross which helped me with my epiphany about the puzzle game. But, I had written the beats and instrument systems such that I could decouple them from the platforming game really quickly, and prototype the puzzle game really rapidly.

The Future of GridBeat and Project Legato

Will I ever work on similar games that help teach melody and harmony? Maybe not in the near future - I’m going to take a short break from game development while I work towards graduating. But maybe after that I’ll keep on going on this as a side project, and make Project Legato the trilogy it originally was going to be.

I might make a new level pack for GridBeat in the near future though - I’m thinking about introducing more instruments like tom-tom drums and the ride cymbal that would be cool to explore.

Overall, while I’m extremely proud of how this semester went, I’m really, really tired. I’m looking forward to taking a short break and returning back to making games with renewed energy and creative ideas!

This blog will stay up as long as I continue to pay for the domain, which I will likely do indefinitely.